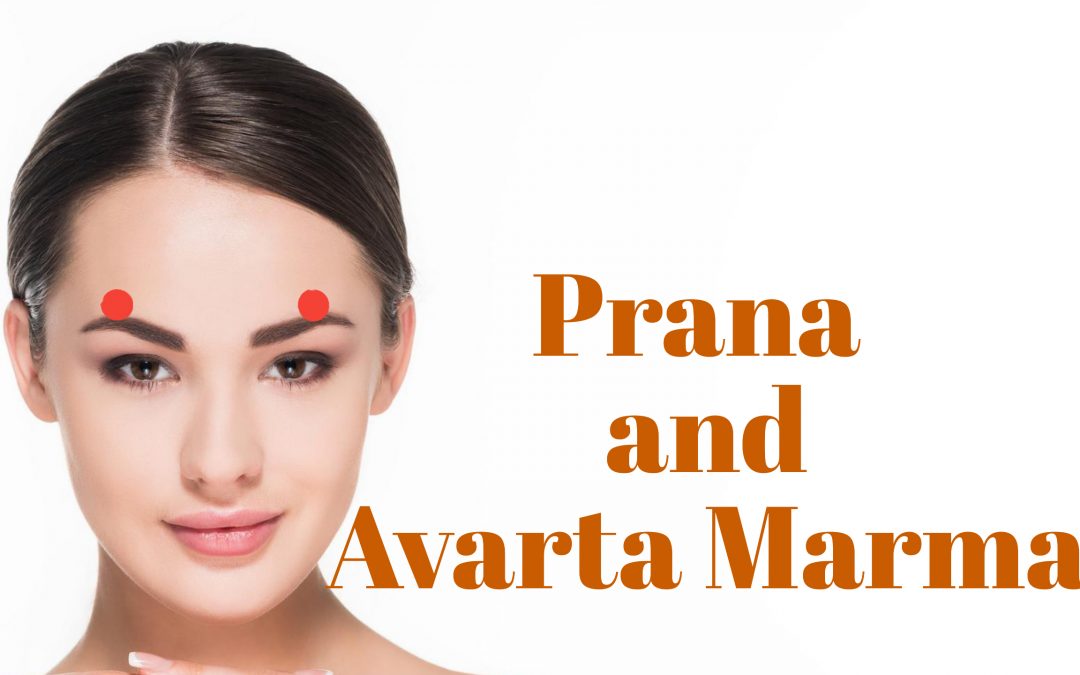 Avarta marma is one of the Shirogata marmas, which are located in the head and neck region. It is a vital marma having its relationship with the eye. The word ‘avarta’ means disaster, thus implying that the point is very sensitive. As per Acharya Sushruta, it is a vakalyakara marma, i.e., disability-causing marma if there is a severe injury on it. This marma controls vata in general, prana – the sense of sight (Alochaka Pitta) and bodily posture.

The avarta marma is very beneficial in cases where you have eye stress, eye strain, headaches, migraine, even in patients who have facial paralysis or post-facial paralysis. Since it is associated with lacrimal ducts located on the supraorbital region, it helps in eyeball lubrication. The avarta marma is also used for insomnia patients or for frontal sinusitis, where there is a lot of congestion in the frontal region. Speaking in terms of the prana and ayurvedic terminology, avarta marma affects the prana Vayu and controls the eye’s sense organs. Acharya Sushruta also mentioned that if there is severe trauma on this marma, then there can be a loss of vision. So we have to be careful that we do not overstimulate it, and only gentle pressure is applied there.

Technique of stimulation of avarta marma

Site: According to Acharya Sushruta, the anatomical location of avarta marma is just above the eyebrows, where frontal bone, sphenoid bone and zygomatic bone meet. Precisely, it lies on the lateral aspect of the mid of the eyebrow, where we can feel a small depression. Therefore it is easy to locate the avarta marma. The avarta marma has a close relationship with vital structures such as a supraorbital artery, supraorbital vein, ophthalmic vein, supratrochlear nerve, lacrimal nerve. Proper stimulation of the avarta marma helps in treating a variety of diseases.

Self-stimulation of avarta marma: There are two avarta marmas in the body located just above both the eyes. Stimulate the left side avarta marma with the right hand and the right side with the left hand. Before starting the stimulation process, keep the head straight and in a relaxed state. Also, take a deep breath in and out. For analyzing the marma site, identify the midpoint of the eyebrow. Place the tip of the thumb at the mid of the eyebrow. Now move towards the lateral side of the notch, where you might feel a slight depression. This depression is the site of avarta marma. Stimulate this point for effective results. But always take care not to stimulate the supraorbital notch as specific vital structures pass through the notch.

The direction of pressure is slightly posteriorly and upwards rather than downwards. The pressure applied is intermittent and not continuous. It is appropriate to press the marma point when you are exhaling and release when you are inhaling. The whole press and release action will take approximately 3 secs. The marma point is stimulated 20-25 times per sitting three times in a day. Be cautious while applying the pressure as sometimes the thumb might slip down because of the oily or moist skin of you or the patient, and the eyes/eyeball of the patient might hurt. So for precaution, always make sure that the eyes are closed while you stimulate the marma.

The avarta marma is considered the vital connecting point to all aspects of our energies, from the innermost consciousness to the eyes. Thus controls the Prana Vayu and helps to improve strength, adaptability and equilibrium.